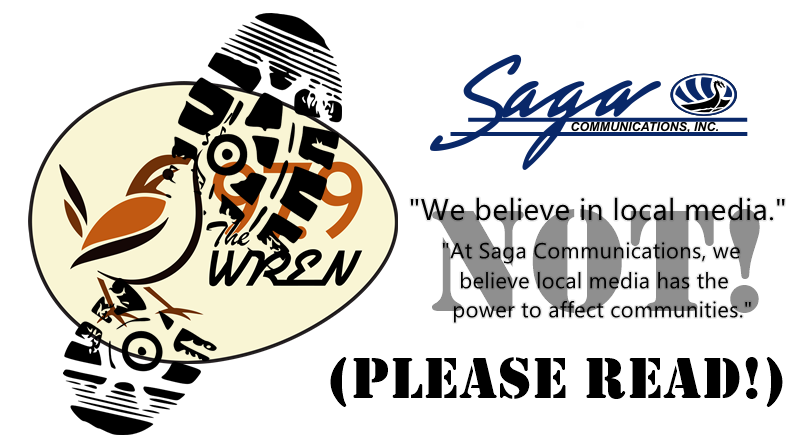 Saga Communications has petitioned for the denial of WREN’s Federal Communications Commission (FCC) license renewal.  For the most part they have thrown anything that they can think of against a wall hoping that something will stick.  And a a little may in the end although for the most part this filing is about a very large monopolist broadcaster who hates competition.

WREN is indirectly associated with WXRK, WPVC, WVAI, and WKMZ in Ruckersville.  The four Charlottesville stations share a common studio location and a transmitter site on Rio Road.  We also share a computer network, antenna system, Emergency Alert System equipment, and various office equipment.  This is strictly an arrangement to share expenses.  There is also a legal and independent group, Experience Media that serves primarily as a clearinghouse for commission payments to a small group of part time, independent underwriting sales representatives.  The stations are all completely independently owned and operated.  Unlike Saga, WREN is limited to just 100 Watts of power.  We are also non-commercial and truly locally owned and operated.  WREN is a volunteer operated station with only one, small, part time paid position.  We don’t make any money from our operation.  We simply really do believe in local radio!

Saga Communications has a record of filing petitions similar to this one against small commercial and non-commercial radio stations in many of their markets.  Part of their goal is simply to drain them monetarily in legal fees.  That is where we do need your help!  While WREN all but certainly will remain on the air in Charlottesville for many years to come, the cost to fight this petition will be somewhere between $3,000 to $4,000 dollars.  It would be more than that save for helpful and sympathetic attorneys who are handling our filings with the FCC.

We know that we always ask for money albeit in a very low key way but we really could use your help.  Any donation will be appreciated!  For donations of $35 or more, we will give you a just WREN t-shirt, WREN pens, and bumper stickers too!

For the record, the Saga Communications FCC license renewal denial filing against WREN and the other Virginia Radio Coop related stations is a available from the FCC at this LINK.

We will post a link to our reply once it is available.